A successful film project is based on excellent team performance. In order not to lose any time in decision-making processes editors, directors and producers need to work together as closely and efficiently as possible. This is where the video feedback tool ARRI Webgate comes in, to facilitate an ideal teamwork. We will explain what a video feedback tool is and what you will need it for. 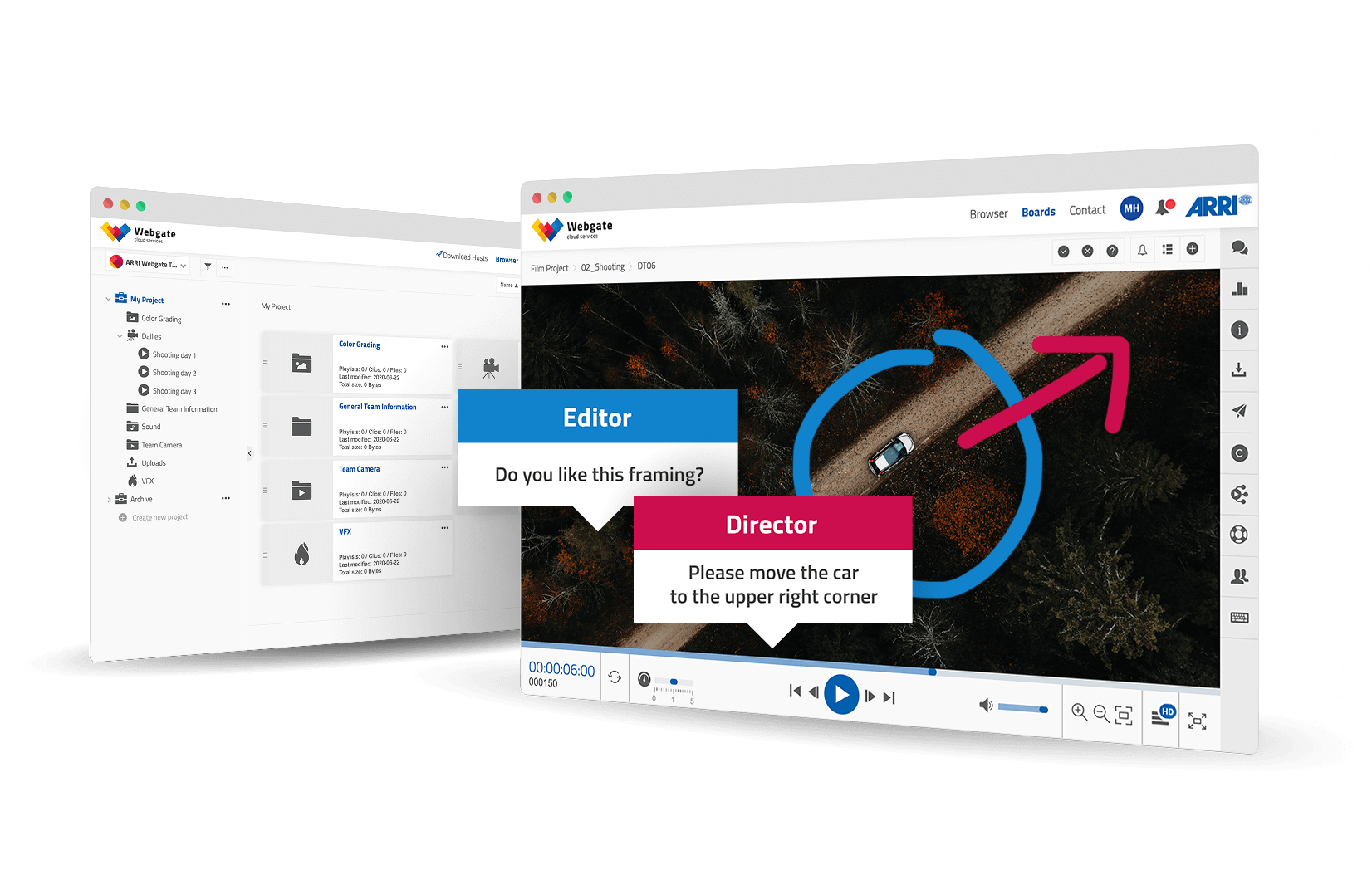 Simplified teamwork and collaboration with a video feedback tool

The members of a film team often work from different locations. This makes voting on, for example, rough cuts or final edits more complicated. However, with the right resources, the challenges of globally distributed creatives and decision makers can be successfully met. For smooth feedback loops, a common exchange platform is required so that every team member has access to the relevant data. This platform must guarantee that footage can easily be viewed and feedback on the data be given directly.

A video feedback tool like ARRI Webgate offers a film crew exactly these opportunities. Additionally, every member will be informed about new data via email the moment the material is uploaded.

For more precise feedback: Comment directly in the video

Once a director or producer has watched a cut, the feedback should of course be delivered back to the editing room. Either this exchange can happen in an analogue feedback process: by typing hundreds of pages in Word with manually noted timecodes, where after collecting the feedback, it needs to be implemented comment by comment, or by just using the right tool. 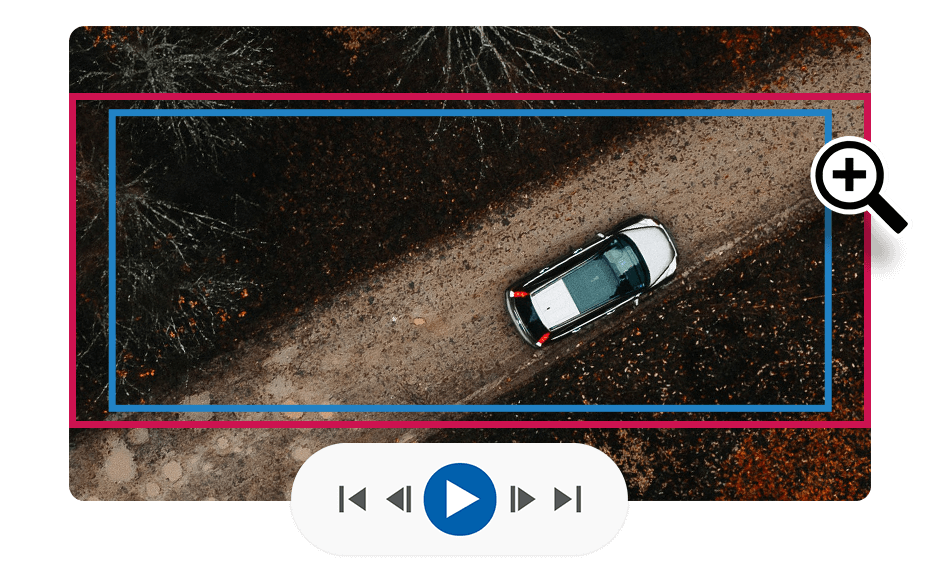 The video player of the film industry

To help you with video review and quality control (QC), ARRI Webgate offers a frame-accurate video player designed specifically to meet the challenges of the film industry. In addition to the standard functions, the video player offers the following options:

With the zoom function you can enlarge parts of your video while playing it to be able to judge details.

You can also change the playback speed and adjust the background color of the player to identify color inaccuracies at the edges. 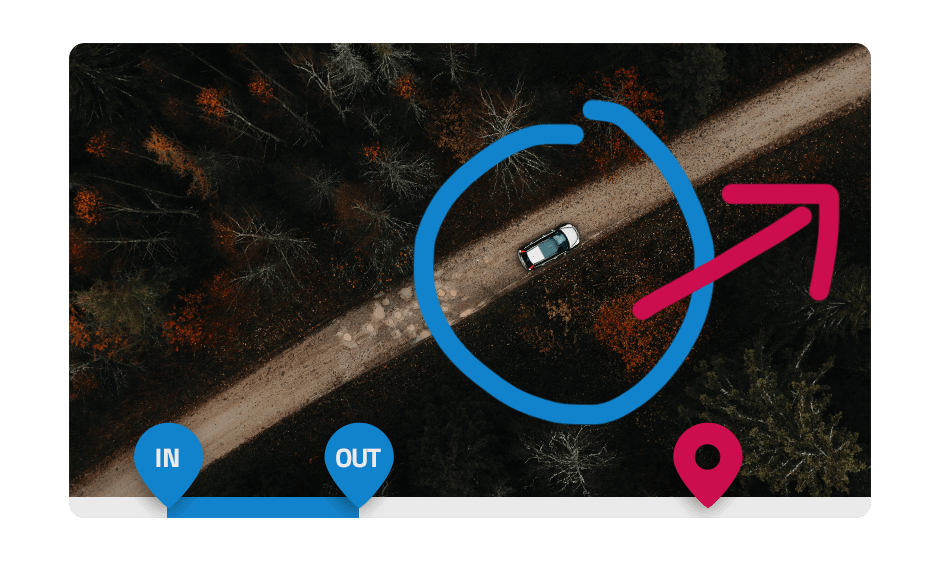 With a feedback tool like ARRI Webgate this exchange is smoother, faster, and printer friendly. Comments can be made directly on any single frame or on in- and out-points. To get the feedback into one systematic thread, you can also reply to specific comments.

Freehand feedback: Some comments are better drawn than written. Draw, mark and sketch your concern – simply and unmistakably.

Draw in different colors directly into the picture or on your video and share your drawing as a comment with your team. Comments on frames or between in- and out-points are displayed on the timeline. 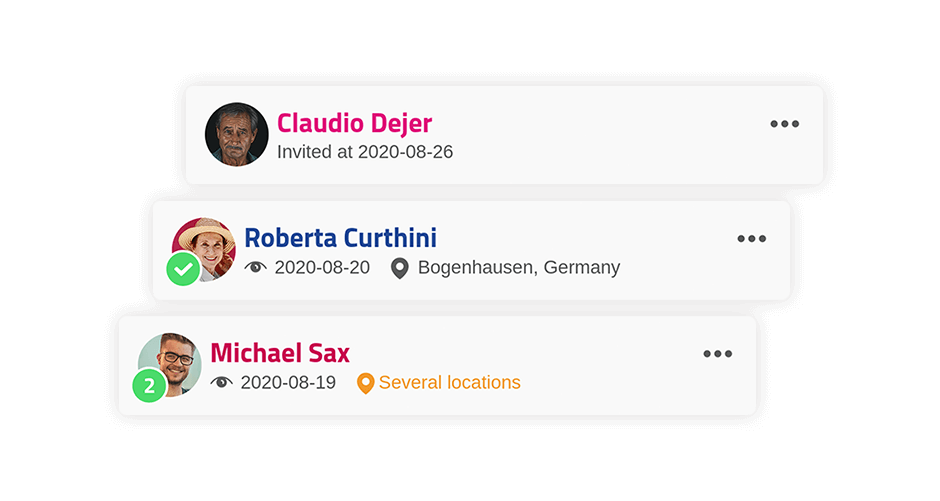 Make ARRI Webgate your video approval tool. If feedback is to be collected from external parties, a Directlink with a feedback option is created and sent to the stakeholder via email. Neither a user account nor a login is required to view the content and leave comments or ratings. 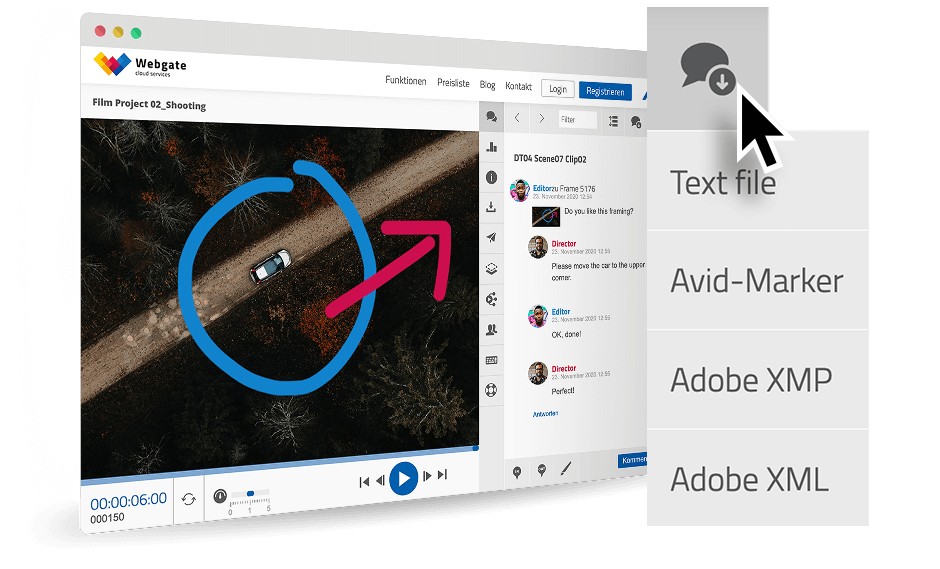 All comments are in one place and every authorized member of the team is informed about relevant feedback. If the suggested changes are to be implemented in the editing process, ARRI Webgate offers the option to export those comments for various editing systems.

Turn feedback into action: For further editing, export all comments as Adobe XMP and Avid Marker files. For a list view an export as text file is available with information on the framerate, the commentator, as well as source- and sequence timecode.

With the Kanban boards in ARRI Webgate, we provide you and your team with a new collaborative project management tool. Discuss, collect feedback on tasks and create to-do lists in your team. See who is working on what at a glance, and how far advanced the individual parts of your project are.

Organization and order are essential

Make ARRI Webgate your virtual workspace and online storage: In a film project there are numerous playlists, galleries, documents and files, which all need to be organized. For this purpose, higher-level rooms can be created in which the data can be organized within a classic folder structure. It is upon every team to decide who has access to which area, and who has authorization for what.

Film productions deal with highly sensitive data, especially, when the movie is still being edited or a DCP is finished but has not been released yet. If the data falls into the wrong hands, the economic damage is enormous. The advantage of ARRI Webgate as an online platform, compared to a physical medium, is that, the production company has complete control over who has access to the data and can change the access rights at any time. As an additional protection mechanism against unauthorized distribution, with ARRI Webgate you can “burn” the name of the recipient into the content as a personalized watermark.

Up to date – whatever happens

Keeping track of the current state of affairs becomes a more complex and larger task for each team member as the complexity and size of a film project increases. To never miss anything important every team member can subscribe to any kind of content. This can be newly created playlists, but also clips, uploaded data or set comments. All information on news and changes happening in created and subscribed projects can be found behind the bell symbol. Additionally, Kanban boards are available for you to monitor the progress of your film project.

Of course, a film project can be brought to a successful conclusion without a video feedback tool. However, for multi-site shootings with teams of several people, it is advisable to use the appropriate film production tool in order to get to the finishing line faster, professionally and efficiently. ARRI Webgate offers the tools to optimize the communication between team members and enhance their self-organization for film productions of all sizes - from series, TV-shows and movies up to international blockbusters. Every member stays up to date about relevant changes in the project and important feedback reaches the right people. Pressing fast forward for every film project.

A shout-out to keyboard shortcuts

Have we piqued your interest?